SAN JUAN, Puerto Rico, Aug. 16, 2021 /PRNewswire/ — Momentum SE and officials from premier fishing tournaments across North America united on Monday to announce the formation of the Sport Fishing Championship (SFC), an eleven-event competition series that will award one grand champion in the sport of offshore fishing. The announcement was made at the 68th Annual San Juan International Billfish Tournament, which will serve as one of the tournaments on the competition circuit in 2022. 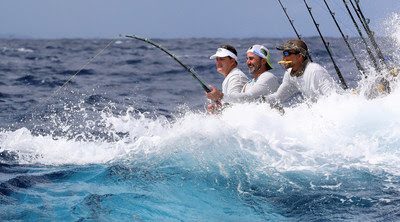 Officials unveiled the Sport Fishing Championship, an 11-event series that will crown one champion of offshore fishing.

For the first time, the Sport Fishing Championship will connect independent, established fishing tournaments, creating a strategic alignment, and ultimately establishing a top titleholder. The series represents one collective vision from each of the partnering tournaments that together boast more than 400 years of fishing tournament history.

The SFC will award four winners based on results from the eleven-tournament regular season, which features three “championship fish” competitions and a points-based billfish championship. Teams earn points based on their placement in each qualifying tournament, plus are awarded additional points for every qualified catch throughout the season.

The SFC’s inaugural season begins in April of 2022 and will travel across North America for five months, showcasing the following tournaments:

“We look forward to awarding the championship fishing team of the year at the IBT69 in San Juan next August,” said Roger Casellas, Chairman of the International Billfish Tournament – the oldest offshore fishing tournament in Puerto Rico. “It will be an honor to invite anglers from across North America to the 69th edition of our tournament and crown a champion for the sport.”

At the conclusion of the SFC’s regular season, the winning team in the Billfish competition will receive the prestigious championship trophy and substantial cash prize. (The SFC will unveil details of prize earnings in the Spring of 2022.) Crafted from lead crystal and mounted on a granite base, the stunning SFC Championship Trophy features a cresting marlin and measures three feet in height. The one-of-a-kind piece was designed and crafted by glass artist Susan Gott at the Phoenix Studio in Tampa, Florida. Later this year, the SFC Trophy will debut at Bisbee’s Black & Blue Tournament in Cabo San Lucas.

“We are thrilled to be working with the family of Ernest Hemingway to bestow the Ernest Hemingway Championship Trophy to the winner of the billfish competition,” said Mark Neifeld, CEO of Dallas-based Momentum SE. “Ernest Hemingway was passionate about sport fishing, and naming the iconic trophy in his memory will be an appropriate way to honor his legacy.” The first year of the championship competition, 2022, also marks the 70th anniversary of “The Old Man and The Sea,” an American literary masterpiece that earned Ernest Hemingway a Pulitzer Prize and the Nobel Prize in Literature.

Momentum SE will serve as the multimedia and marketing rights holder for each partner tournament and manage merchandise, hospitality, and travel packages, as well as SFC licensing opportunities, including video games, trading cards, and NFTs.

Longtime director of the Mississippi Gulf Coast Billfish Classic, Bobby Carter, will lead a Board of Advisors comprised of one representative from each partnering tournament to serve over the SFC. Neifeld will serve as the SFC CEO and Commissioner. In addition, Wayne Bisbee, owner of Bisbee’s iconic fishing tournaments in Cabo San Lucas and former founder of the World Billfish Series, will serve as an advisor to the SFC.

About the Sport Fishing Championship
The Sport Fishing Championship (SFC) is the world’s premier offshore fishing series, consisting of eleven points-based tournaments, culminating in one grand champion angling team. Competitors earn points based on their placement in SFC Qualifying Tournaments and additional points for every qualified catch recorded throughout the regular season. The top team receives a substantial cash prize, as well as the prestigious SFC Championship Trophy, carved out of lead crystal and measuring 3-feet in height. For more information about the SFC, visit SportFishingChampionship.com or follow on social @sportfishingchampionship.